"We're dealing with one of the largest armies in the world. It's a very different situation and things could go crazy quickly."

Biden reiterated that under no circumstances would he send US troops to Ukraine, even to rescue Americans in case of a Russian invasion.

"That's a world war. When Americans and Russians start shooting one another, we're in a very different world," he said.

Biden's remarks were released hours after Russia rolled its tanks across Belarus for live-fire drills that drew an ominous warning from NATO and added urgency to Western efforts to avert war on the continent.

2. Nile Gardiner (February 2022), a former aide to Margaret Thatcher, states that the "impending" war in Ukraine exposes not just the "shameful appeasement mindset" of European ruling elites but also illustrates the "tragic" decline of US leadership on the world stage. He said: "It is no coincidence that Vladimir Putin has mobilised more than 150,000 Russian troops on Ukraine’s borders while Joe Biden is in the White House.

"Clearly, Mr Putin views Biden as a pushover, a weak-kneed president obsessed with his sinking domestic agenda while Rome burns across the Atlantic."

Mr Gardiner describes Mr Biden's foreign policy as reactive, responding to a possible Russian invasion instead of preventing one and relying on multilateral diplomacy rather than projecting US might....

He went on to state that the "disastrous" US withdrawal from Afghanistan in August had also convinced the Kremlin the US "no longer had the stomach to fight".

Mr Gardiner claims: "Joe Biden has shown himself to be a president of limited ability, short-sighted vision, and extraordinarily bad judgement.

"Instead of heading to Europe this week to rally America’s allies to stand up to the Russian bear, he is entrenched in Washington, surrounded by sinking poll numbers and tied to a failed left-wing political project at home.

He concludes: "These are dangerous times for the free world. A world without America at the helm is unthinkable. But that is the direction the Biden presidency is taking us in."....

3. Sen. Ted Cruz (R-Texas) (February 2022) believes that President Joe Biden assuming the role of chief executive has been “the best thing that ever happened” for Russian President Vladimir Putin.

“Tragically Europe is on the verge of war because of the weakness, the fecklessness of Joe Biden,” Cruz said during an appearance on “Fox News Sunday.”

He went on to argue that the chaotic withdrawal from Afghanistan last year was the “worst military catastrophe for the United States in decades” and had emboldened “all of our enemies across the globe.”...

Trump slapped back and Biden in a dramatic fashion on Tuesday as he left the White House, in response to the former vice president's claim that the Republican president is an 'existential threat' to democracy in prepared remarks the Democrat's campaign released early.

'When a man has to mention my name 76 times in a speech, he's in trouble. Now, I have to tell you, he's a different guy. He looks different than he used to, he acts different then he used to. He's even slower than he used to be. So I don't know,' the U.S. president said. 'But when he mentions my name that many times I guess I should be complimented.'

5 (a) On February 10, the two-faced gas-emitting White House incumbent made a historical infamous remark that "no circumstances would he send US troops to Ukraine, even to rescue Americans in case of a Russian invasion. Just use your common sense. When a guy would not rescue his own people in case of an invasion, do you expect him to save others and their country? The Russian leader is no idiot, and he would definitely get the coward US leader's message. 😇

(b) Another notable point is that the US is the first country to evacuate Ukraine embassy amid Russian invasion fears, signally that it is not prepared to stay in Ukraine to clash head on with Russia. Isn't it good news to Putin to know that the US is trying to avoid a war with his country? US Embassy Employees Have Been Ordered To Evacuate Ukraine

(c) In response to Biden's prediction on Russian invasion, Oleksiy Sorokin, political editor for the Kyiv Independent news site, said: “My first reaction was, ‘Oh, my God, what am I hearing right now?’ It felt like he was giving Putin a green light to invade Ukraine. I was thinking, ‘When should I wake up tomorrow, so not to miss the Russian invasion?’” 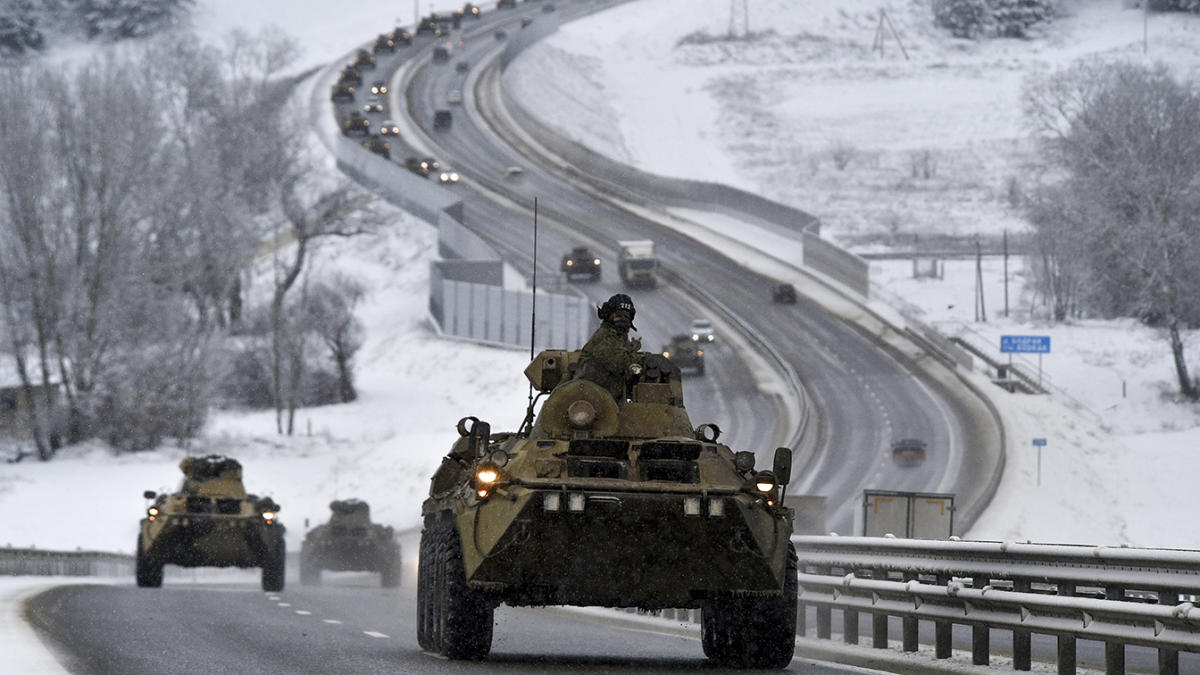 On Wednesday, Ukrainian President Volodymyr Zelensky assured his people that a Russian invasion was not imminent, despite media “sources of mass hysteria.” Hours later, President Biden sounded a very different tune about Vladimir Putin’s intentions, one that made Ukrainians anxious.

6. Anyway, Biden keeps repeating his prediction of Russian invasion so many times that it has become a self-fulfilling prophecy. In addition, he showed the world he was more concerned about the so-called China threat in Asia than the Russian invasion against Ukraine by wasting precious time sending Blinken about two weeks ago for a quad meeting in Asia instead of an emergency meeting in Europe to resolve the Ukrainian crisis.

The two-faced gas-emitting White House incumbent, Blinken Eyes and other Sinophobic politicians in Washington cannot wholly walk away from the crisis in Europe. In addition to their Sinophobia, their loss of credibility, their irresponsibility to their allies and coward response to Russia's sabre-rattling have encouraged the Russian nationalists to redraw the map of Europe.

In response to the laughable actions of Blinken Eyes and his two-faced lameduck boss, I compose the following poem by borrowing some words from a Tang poem 寻隐者不遇 (Seeking the Hidden One) by the ancient Chinese poet 贾岛 (Jia Dao). I left the translation of my poem to readers. 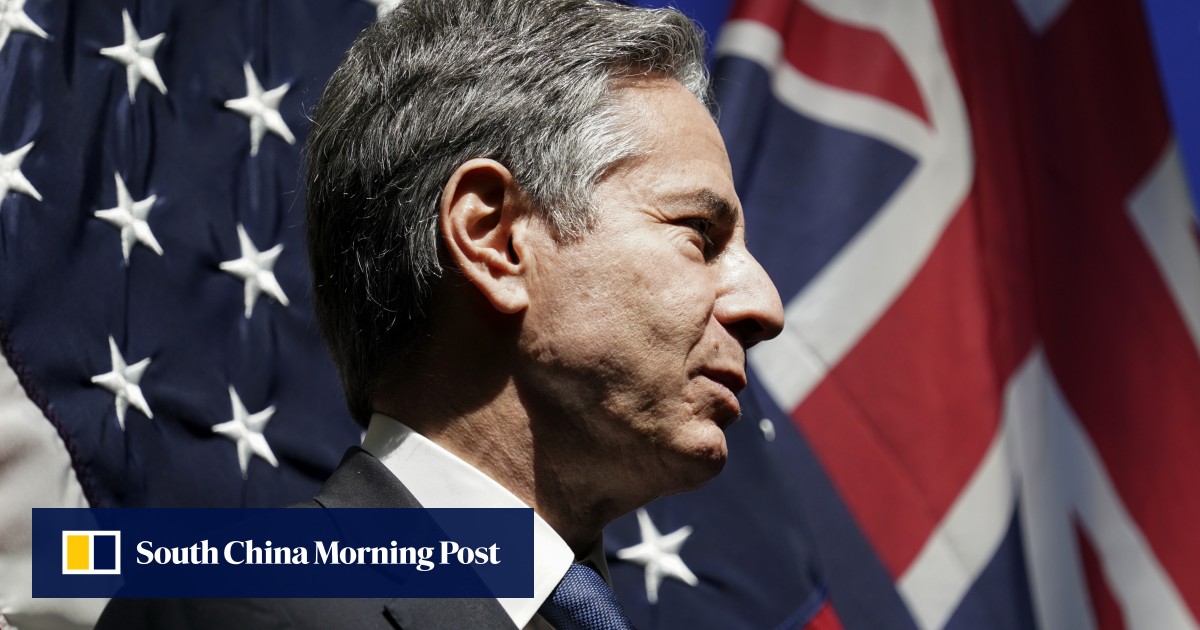 Blinken: Century will be shaped by Indo-Pacific

Blinken is in Melbourne to meet counterparts from Australia, India and Japan; the four nations form the ‘Quad,’ created to counter China’s regional influence.

the annoying thing said:
Joe just that way a true coward unless its corn pop hes facing
Click to expand...

Joes a brave man and a true democrat
Werbung:

yes, with all the warning there was, any americans who stay in ukraine need to be on their own. Just like in afghanistan.

unless you believe in "nanny government" who takes care of you every day from cradle to grave?