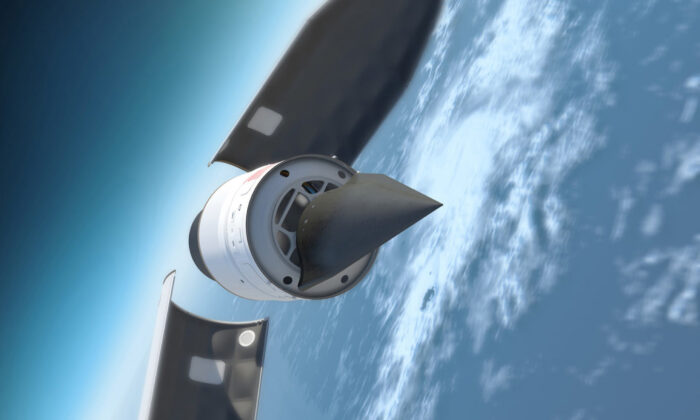 The U.S. Defence Advanced Research Projects Agency’s Falcon Hypersonic Test Vehicle emerges from its rocket nose cone and prepares to re-enter the Earth’s atmosphere, in this illustration. (Courtesy of DARPA)

U.S. Secretary of Defense Lloyd Austin said last week that Chinese air force movements toward Taiwan look like “rehearsals” for an invasion. It is good that America’s military leadership is finally realizing that Xi Jinping is serious when he says he will use force, if necessary, to seize Taiwan.

Yet, in recent years whenever the U.S. military has “war-gamed” a fight with China over Taiwan, the Americans reportedly have “failed miserably.”

Depending on how you construct the scenario, things might turn out better for the United States.

You see, if the fight is confined to Taiwan and the surrounding area, the Chinese have a big advantage. They can deploy far more ships than the U.S. Navy can, and the same goes for aircraft. Chinese land-based missile and anti-aircraft batteries will further make things difficult for U.S. forces trying to “get in close” to help Taiwan. One doesn’t envy a U.S. destroyer skipper who has two-dozen supersonic anti-ship missiles coming his way and arriving in 90 seconds.

And the People’s Liberation Army Rocket Force’s ballistic missiles, which is able to hit moving targets at sea, will give U.S. aircraft carriers much to worry about. The missiles are nicknamed “carrier killers” for a reason. U.S. bases in Japan and Guam, from which American forces will be deploying to aid Taiwan, will also be getting Chinese missile attention.

This just covers a few of the problems facing U.S. forces and the Americans can, of course, strike some blows of their own.

However, expand the battlefield, say, to include the entire globe, and the United States’ prospects improve considerably.

Here’s why:
China does not produce enough food to feed itself, nor does it have enough energy or natural resources to power its economy. That’s why the Chinese buy up Brazilian and Ukrainian farmland, Australian milk companies, and American pork producers. The same goes for Chinese oil concessions in Iran, Iraq, and Venezuela; and mines in Africa and South America. 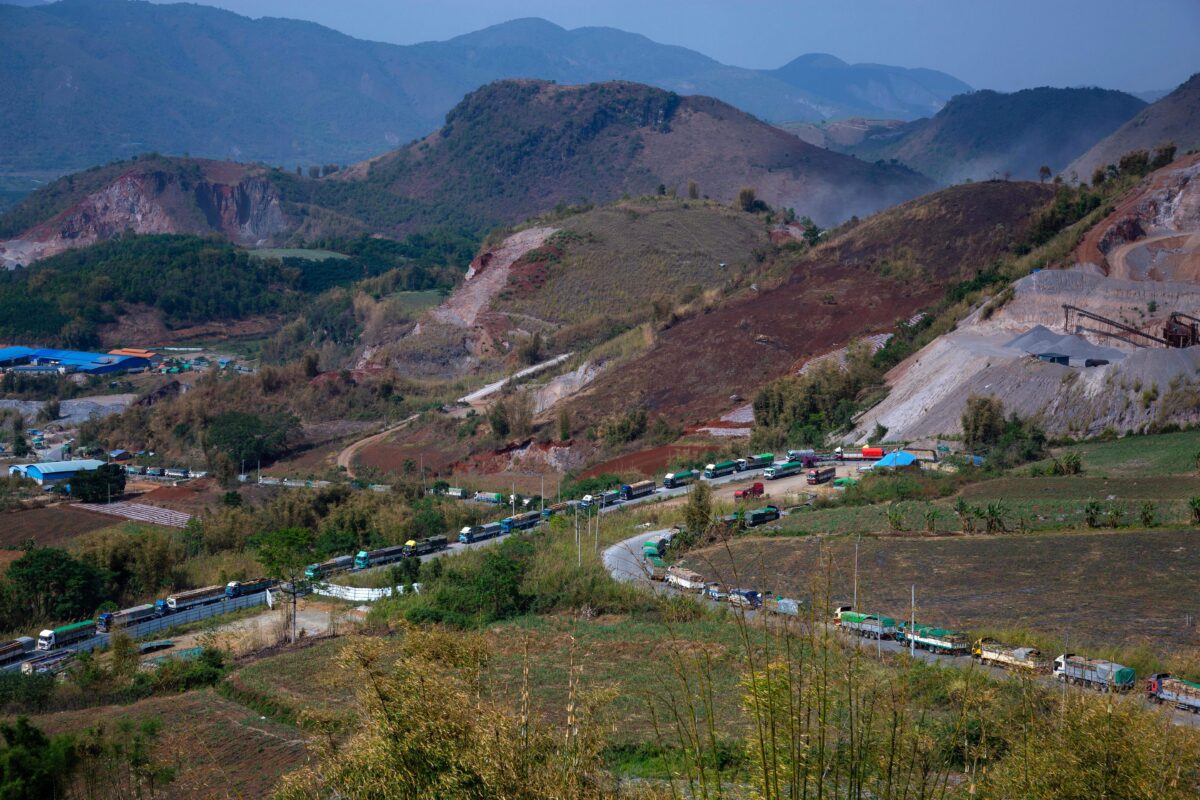 China not only depends on seamless (and long) supply lines to import commodities and raw materials, but it also depends on the same supply lines to export manufactured products that earn vital foreign exchange—and keep people employed and the economy humming.

If the Americans (and their allies and partners) “expand the battlefield” and cut off China from its overseas “assets,” as one Western expert puts it: “without these commodities arriving in China from around the world, the China we know and the Chinese know will not exist … it will be 1.4 billion persons desperate for food, energy, commodities, natural resources.”

So if the United States musters the fortitude needed to impound or sink Chinese shipping and clamp down on air transport in and out of China, the Chinese Communist Party (CCP) will be in dire straits.

The People’s Liberation Army (PLA), despite carrying out the biggest, fastest defense buildup in history—including progress toward a “blue-water” global navy—over the last 20 years, still cannot defend China’s overseas assets. And it will probably be another decade before PLA global power projection capabilities can do so.

So while Beijing might like its prospects in a straight up (and confined) fight to seize Taiwan, it is extremely vulnerable if the United States and other free nations “decouple” China from its overseas assets—and the convertible currency and inward foreign investment and trade that powers the Chinese economy.

But the Americans should not breathe easy. 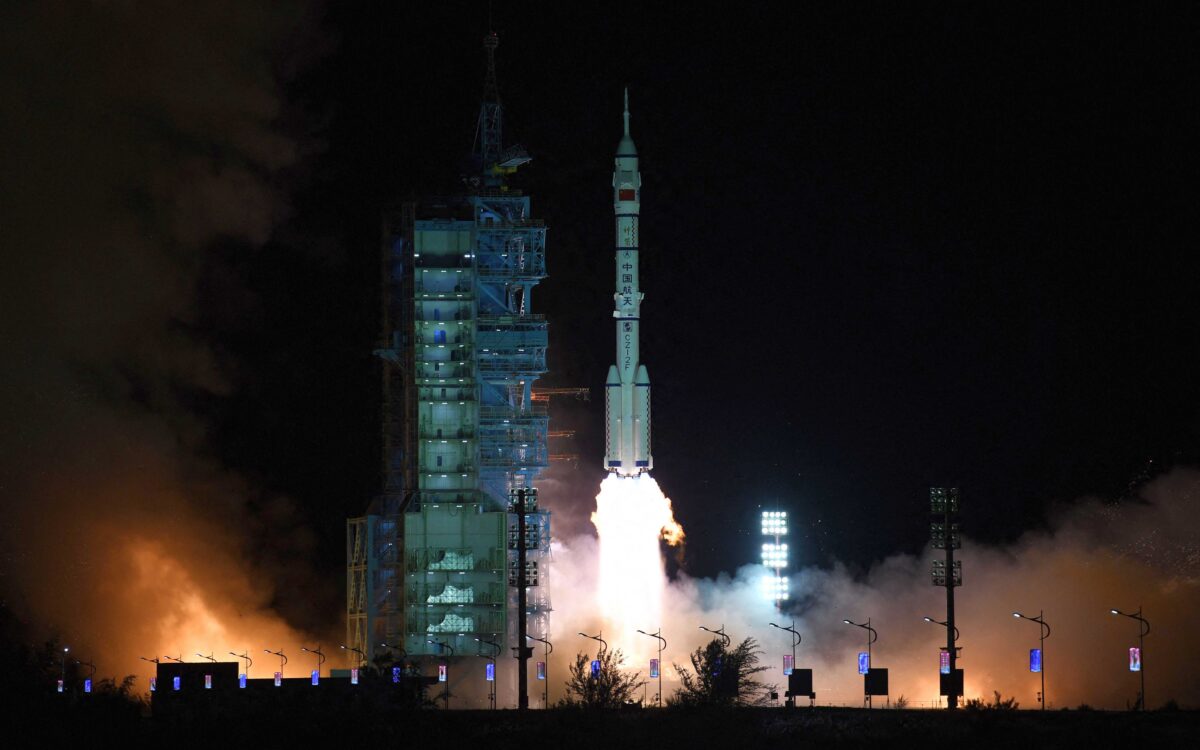 A Long March-2F carrier rocket, carrying the Shenzhou-13 spacecraft with the second crew of three astronauts to China’s new space station, lifts off from the Jiuquan Satellite Launch Center in the Gobi desert in northwest China early on Oct. 16, 2021. (STR/AFP via Getty Images)

If China can seize the high ground in outer space and the upper atmosphere—and threaten the United States with a surprise (and undefendable) nuclear attack, as well as blinding U.S. forces by taking out their satellites—it might be able to checkmate the Americans. At that point, America’s existing conventional advantages, both kinetic and non-kinetic, won’t matter much.

China’s recent tests of hypersonic delivery vehicles and the so-called FOBS (Fractional Orbital Bombardment System) give the American’s plenty to worry about in this regard. These are hard to track and to defend against—not least as they allow nuclear warheads to be launched from directions where U.S. anti-missile systems aren’t looking.

And, in a further move to dominate the high ground, the Chinese (and the Russians) are aiming for offensive operations against U.S. satellites on which America’s defense depends. They have, in fact, already started interfering with U.S. space assets.

Earlier this year, the commander of the U.S. Space Command, General James Dickinson, stated in a congressional hearing:

In his written testimony, Dickinson added:

“One notable object is the Shijian-17, a Chinese satellite with a robotic arm. Space-based robotic arm technology could be used in a future system for grappling other satellites. China also has multiple ground-based laser systems of varying power levels that could blind or damage satellite systems. China will attempt to hold US space assets at risk while using its own space capabilities to support its military objectives and overall national security goals.”

So far, the Americans are apparently just playing defense in outer space—rather than building up the offensive capability to do to the Chinese (and the Russians) what they are planning to do to them—and more. According to one observer, Team Biden’s response so far is “finger wagging and scolding.” Not exactly a winning approach.

One imagines a scenario where Beijing makes its move on Taiwan and tells Washington to “stand back”—and that includes sanctions and attacks on China’s supply lines—or it will face “blinding” and nuclear attack “from above.”

This is, of course, something of a poker game if things reach this point. The Chinese might be bluffing, or they might not. And it will take a certain type of American president to call their bluff. But whoever it is, if the Chinese get “the high ground,” there will be a number of people telling the president that “Taiwan isn’t worth it” and to “let it go.”

So, while the current focus is on Taiwan and conventional hardware and capabilities needed to deter a Chinese assault, the United States will do well to prepare to “expand the battlefield” and hit China where it is most vulnerable.

But the United States also needs to “look up” and do what is necessary to dominate outer space and counter China’s hypersonic and FOBS capabilities that potentially “checkmate” America’s earthbound advantages.

Not surprisingly, America’s military leadership knew of China’s developing hypersonic capabilities some years back and, by and large, ignored it.

One hopes they do better this time.[Full text see PDF]
Click to expand...

Yes, my great friend, thank God they are really games.

If they are not, it will be the end of the world for all mortals, you and I included.

Then do you and your falling gong still have the chance to dump all your rubbish here and in other forums?

The situation in the Taiwan Strait is "complex and grim"

Drifting Toward a Catastrophic American Defeat

Another Reason Missile Defense Must be Perfected