What do you think actually goes on inside that damn place?


Do you ever wish you could work there and have full clearance? I sure do =(
Werbung:

The way I've heard it told, all the good stuff is at Wright-Patterson AFB these days.

Still a possibility...though I don't even know how to go about seeking employment at Area 51.

Thats where they build those Directed Energy Wepons, like the ones used to bring down the WTC and also as a convienent demonstration of power, they distroyed part of I580 in California. Does anyone really believe that a petrol fire could cause the kind and magnitude of damage shown in the news pix?

n0spam4me said:
Thats where they build those Directed Energy Wepons, like the ones used to bring down the WTC and also as a convienent demonstration of power, they distroyed part of I580 in California. Does anyone really believe that a petrol fire could cause the kind and magnitude of damage shown in the news pix?
Click to expand...

If it was a "demonstration of power" why wouldn't they take credit for it? Why would they use a cover story? And why is it that the experts are calling it an accident too?

You get the point.

Spam clearly has a hard on for conspiracy theories. Nothing will ever change that.
R

Ive Flown in more than a few Tomcats, I used to wrench on them, F-4 Phantoms, and Huehy Uh1n, choppers.....
The F-4 is the most awsome display of power a fighter jet can produce the Tomcats were slick as hell a pain in the ass to work on too. the huehy's were a constant exercise of maintinence versus flying
R

Clovis A.F.B. is where the real freaky stuff is
as well as below the new airport in Denver
R

"Travelers are in for a uniquely Colorado experience when they pass through Denver International Airport. The works of art that grace the airport create a journey through our state's history and diversity. Like all successful public art, the program at DIA exemplifies an expression of ourselves and provides an opportunity to educate others" - Mayor Wellington B. Webb

"What in God's name is that all about? Man, that's sick! - Doug McGivens of Glen Burnie, MD. while looking at the mural

"Ah, terrific...I don't need this right now. What a horrible thing to have up for people to have to look at!" - Karen D. from Broomfield, CO after her 8-year old daughter got upset at seeing the mural

"The damn sneaks" - Me, when I saw they painted over and changed some of the murals
An African woman in colorful native garb; a Native American woman who's heritage the airport's art supposedly celebrates; a blonde girl with cupid bow lips, a Star of David on her chest and a bible in her hands. Each lay dead in open coffins for your viewing pleasure. A burning city, children sleeping on piles of bricks, a line of mourning women in rags with dead babies, limp in their arms. A huge, looming military figure in a gas mask brandishes a sword and machine gun. Part of an actual note written by a child interred in a Nazi death camp. Strange words embedded in the floor with no explanation about what they mean. Welcome to Denver Internatinal Airport!

That's just the part you see up close, though. What you don't see are 8 sub-basements, low- and high- frequency sounds that make people sick, air vents jutting out of the surrounding barren acres of fenced lots that have barbed wire along their tops - pointing in. Whole buildings that were constructed below ground level and then buried as is, the excuse being they were "built wrong". An entire runway constructed, then buried under a layer of dirt and "forgotten". The layers of workers and companies who were fired so no one would have a Big Picture. And workers even reported seeing Aliens working there. Are you rolling your eyes and going, "Oh sure..Nazis? Aliens, too huh? CRIPES". Well, I have to admit when I got to that part I did, too. But there's a lot of credible stories about a lot of documented things, so we can start there. With the dead babies and buried buildings. As far as Reptilian NWO and Nazis...I'll mention it...ok? As far as the place being something Not Right Under There, I'm convinced. Except you'll have to take my word for some of it because when I re-researched things to update this section..well! It seems they painted over two of the four walls that make up this sick mural and altered part of one that's still there. But of course, I have pics, and so do a lot of others.

Part One: The Airport

The airport was built in 1995 on 34,000 acres (53 square miles; 137.593 Sq.km) in spite of the fact that Denver already had what everyone said was a perfectly fine airport - Stapleton - which was ordered closed when DIA was built so there "wouldn't be any competition". In fact the new airport has less gates and less runways than Stapleton did (I hope you're saying, "That makes no sense"...). All it does have is a lot more acreage. More acreage than an airport that size could possibly need. Most which sits unused. They say it's in case they need to do any future expansion. DIA is the 7th busiest airport in the US according to a 2002 Crain's Chicago Business report.

The initial cost of this New Beast was to be 1.7 billion dollars (with a "B") but by the time they were done playing games, having problems, getting bailed out and got extra government money (and money from private corporations on top of that), it cost about $4.8 billion - obscenely over budget. I have yet to meet a local who wanted the thing built, or didn't have a frothing, rabid story about the whole mess. Words used to describe the DIA were "buried in technical problems", "poor project management", "overwhelming complexity" and "America's most inconvenient airport". It was built in a high wind area (Stapleton hadn't been) that causes it to be shut down or flights delayed often. The extensive automated baggage system so was messed up, such a circus of errors that it was worse than unusable - it was an industry joke. But it had to be built, and built there. Some say the reason that this was built and there was no stopping it, no cost spared to do so and why it was so SO overbudget and took so many years is because it's really an underground military base and a civilian detainment camp.
R 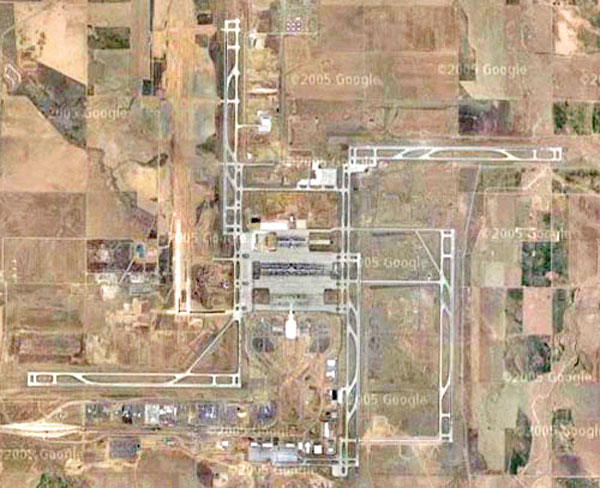 Denver INTL from the Air 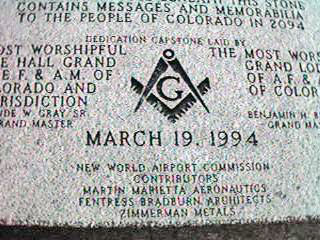 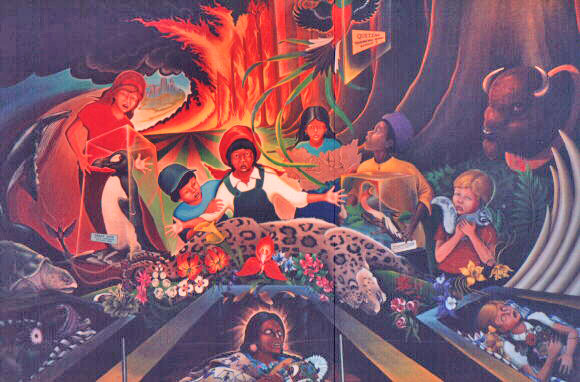