By ANNE FLAHERTY, Associated Press Writer
Fri May 23, 7:18 AM ET


WASHINGTON - An internal audit of some $8 billion paid to U.S. and Iraqi contractors found that nearly every transaction failed to comply with federal laws or regulations aimed at preventing fraud, in some cases lacking even basic invoices explaining how the money was spent.

Of the money paid during a five-year period — from 2001 through 2006 — $7.8 billion in payments skirted billing rules with some violations egregious enough to invite potential fraud, warned the Defense Department's inspector general.

The findings provided fresh fodder for anti-war Democrats, who say the Bush administration has turned a blind eye to the problem of corruption and fraud by relying too heavily on contractors to manage the war.

"There is something very wrong when our wounded troops have to fill out forms in triplicate for meal money while billions of dollars in cash are handed out in Iraq with no accountability," said Rep. Henry Waxman, chairman of the House Oversight and Government Reform Committee.

Results of the investigation were released at a committee hearing on Thursday, the same day the House approved legislation by Waxman intended to strengthen anti-fraud measures and increase transparency in contracting. Waxman's bill was passed as part of a major military policy bill, which authorizes $601.4 billion in defense spending.

In its report, the IG estimated the Army made more than 180,000 commercial payments from stations in Iraq, Kuwait and Egypt in the five-year period. The payments were made for various supplies and services, including bottled water, food and trucks.

In one example, $11 million was paid to a U.S. company without any record of what goods or services were provided, the IG wrote.

Overall, investigators estimated that the Army made some $1.4 billion in commercial payments that lacked even minimum supporting documentation, such as a certified voucher or invoice.

"Payments that are not properly supported do not provide the necessary assurance that funds were used as intended," the IG concluded.
Click to expand... 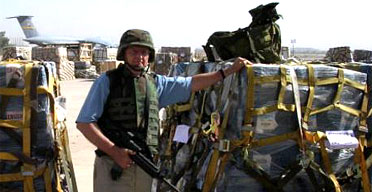 Please could you invade the UK
Werbung:

the iraqis aren't the ones getting rich, unfortunately. all you'd get if we invaded is hundreds of thousands dead and the remainder having to choose between mre's and cluster bomblets that look like mre's that are scattered about the street.

all the money is going to blackwater and halliburton and and other corporate benefactors of massive, indelible cronyism.

Obviously oversight is needed. But is it really possible for the government to give oversight to itself? Do a degree sure, but if they want to fudge stuff they just will.

The lesson that should be learned but won't be: If you want to limit the abuse of government then that can only be done by limiting the size of government not by making it larger by mandating further oversight that can never be completely trusted.

The left blames P. Bush and the military for all the evils of our country while ignoring that the largest crime in our country today is the dismally poor quality of public education which traps people and hurts the economy. Welfare programs do far more to keep poor people poor than they do to help them. And race (all of the above too) is not an issue to use for political gain but is an issue that should be solved.

So while our politicians use all these issues for personal (and party) gain and to grow government we need to be going in the exact opposite direction.

The libertarians have it right. But they have one fatal flaw in their party. Their ideology favors small government with political servants who serve for the interest of the country and not for their own - but powerful greedy politicians are the ones who succeed and go on to become more influential. The libertarians (and conservatives to a degree) select themselves out while the libs and neo-cons select themelves in.

This will of course be true as long as voters vote for their own special interests rather than the interests of the country as a whole. The republicans may commit these crimes on a small scale behind closed doors but the democrats openly and blatantly advocate socialism which is nothing more than the special interests of the lower half of the economic populace stealing from the upper half. It has been said better than I am saying it now that we get the government we deserve. We should all remember that the next time we have a complaint.
Werbung:

So accounting procedures suffer when conducted with people who used to be saddam's corrupt flunkies, managed by troops who were trained to kill, not as cfo's, and in the middle of a four-way war - who'da thunk it.

USDA Handed Out $1.1 Billion to Give Deceased Farmers Incentive to Grow Crops