IRAN Has one last chance!

BERLIN (AFP) - If Iran fails to resolve its nuclear dispute by the end of the year, it may be passing by its last chance to do so, the UN atomic energy agency head said in an interview due out Monday.

"By November, or December at the latest, we should be able to state whether the Iranians are keeping their promises. If they don't keep them, Tehran will have passed by an important chance, perhaps the last," Mohamed ElBaradei, the International Atomic Energy Agency head, told weekly Der Spiegel.

However, the IAEA chief urged international players to "encourage" Iran to cooperate.

"Beside sanctions, there must also be encouragement," he said, underlining that "sanctions alone will not bring any durable solution."

But he added that there were "concrete grounds to suspect" Iran of developing a nuclear bomb.

Asked about the possible use of force against Tehran, ElBaradei said that might destroy a large part of Iran's nuclear installations, but warned of the danger of an explosion of violence in the whole region.

"The already very deep oppositions between the Islamic world and the West would explode," he said.

He added that such a move would also certainly reinforce support for an Iranian nuclear bomb.

Iran and the UN atomic energy agency on August 21 agreed on a timetable for Tehran to clarify outstanding concerns about its contested nuclear programme, amid Western threats of further UN sanctions.

Remember Saddam received a last chance to disarm and dismantle WMDs
Well saddam kept giving bush the run around and look what happend US invaded IRAQ.This is exactly what the soviets did back in 50s & 60s by invading eastern europe to punish what the nazis tried to invade RUSSIA.So were punishing the Arabs for 9-11.

This is what the US occupation would look like 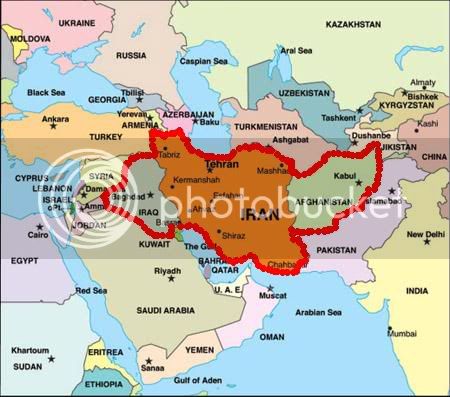 And they would be ruled by us!
Werbung:

Remember you never found those weapons.

steveox said:
Well saddam kept giving bush the run around and look what happend US invaded IRAQ.This is exactly what the soviets did back in 50s & 60s by invading eastern europe to punish what the nazis tried to invade RUSSIA.So were punishing the Arabs for 9-11.
Click to expand...


steveox said:
This is what the US occupation would look like

And they would be ruled by us!
Click to expand...

Yeah sure Steveox. Keep on livin' the dream.

You wont occupy the middle east. You cant even keep peace in the Iraqi capital or keep Afghanistan under conrol, let alone occupy a whole Muslim nation.

Common misconception. We know Saddam had WMD's because he used them. And we did find some stockpiles of these weapons. What we didn't find were the nuclear weapons.

Well, people seem to forget that Bush was broadcasting his intentions to invade Iraq for about a year or so (that time he was supposedly "rushing to war" and "alienating allies" never happened) before it actually occurred. A year is more than enough time to hide/move/destroy any relevant evidence.

I know it was a long time ago and all, but it's easy to forget that Bush was screwing up the prosecution of the war long before he started prosecuting the war. His first mistake was trying to corral up functionally useless UN backing in the face of what he claimed to believe was a serious threat to his country.

I see some differance here. I agree some of of things subline said. But Bush didnt invade IRAQ for WMDs.What Mr Bush did was personal. Saddam tried to kill his dad so hes gonna get him. He even said it during 1999 in a press interview while campaigning.Thats what i think Mr Bush invaded IRAQ for. Is to get saddam.
9

Going to war on a personal level that results in thousands of deaths is totally unacceptable and I don't even think the chimp that is Bush is stupid enough to do that.
9

USMC the Almighty said:
Common misconception. We know Saddam had WMD's because he used them. And we did find some stockpiles of these weapons. What we didn't find were the nuclear weapons.
Click to expand...

Every country has stockpiles of weapons. Bush promised the American public nuclear weapons and dirty bombs capable of destroying fairly distant targets. He never found them

That is true. But we did find WMDs.
9

USMC the Almighty said:
That is true. But we did find WMDs.
Click to expand...

I seem to remember America selling anthrax to Saddam in the 1980's, which is easily up there for one of the most powerful weapons Saddam had at his disposal.

I've had a quick look and it seems that a few vials of nerve agents were found, but thats not what the government told the country they were going after. Bush promised dirty bombs and nukes would be found, and now you claim that these bottles of nerve agent have the potential to wipe out whole countries or something? Thats my idea of a weapon of mass destruction.

If the government had found WMD's, they would have made sure it was bigger news than it apparently is.

Read this people. This is why Bush invaded IRAQ
http://thinkprogress.org/2007/07/14/bush-saddam-dad/

It was personal to him.
Werbung:

OK, i was wrong, Bush is a bigger moron than I thought.

US threatens war in the Persian Gulf
2