Pro-'surge' group is quite all Jews!

Pro-'surge' group is almost all Jewish


Four of five members of the board of a campaign promoting President Bush's policies in the Iraq war are Republican Jews.

Brooks told JTA that the fifth member, William Weidner, a casino operator in Las Vegas, is not Jewish. However, Weidner's wife, Lynn, is Jewish and is active in that city's federation. Blakeman is the group's president.

Brooks said it would be a mistake to regard the group as having a Jewish direction.

"It's a coincidence that several of the board members are Jewish," he said, noting that half of the donors contributing to the group's first $15 million ad campaign are not Jewish.

The ad blitz will promote Bush's "surge" policy in Iraq ahead of September, when Congress is set to assess the success of the influx of additional U.S. troops into Iraq.
http://www.jta.org/cgi-bin/iowa/breaking/103795.html
Click to expand... 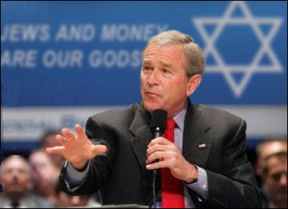 Just a warning here, Untouchable but anti-Semitism will not to be tolerated on this board.

I have never heard a convincing argument for why Israel-loving Jews would pressure the U.S. to act on its behalf when Israel is perfectly capable of defending itself, and has done so in the past.

USMC, I don't really think it's anti-Semitism to point out that Jews are probably overrepresented among the ranks of neoconservatives, any more than it's "Islamophobic" (a joke of a word) to point out that the vast majority of modern terrorists are Muslims.

USMC the Almighty said:
Just a warning here, Untouchable but anti-Semitism will not to be tolerated on this board.
Click to expand...

it's quoted from a jewish website, I'm just wondering how 2% of the people get 90% members in the closer Bush Admin pro-war!
Werbung:

All I'm saying is that I thought it was necessary to warn you considering some of the posts you made here today.

Drums of war against Iran!
2

Hillary Clinton Meets with AJC, Tells the Jews She Exists to Serve Them
2

M
Americans are going to blame big oil and Zionism for getting them into this mess.